The Salon du Livre vs The London Book Fair: A French Intern’s View 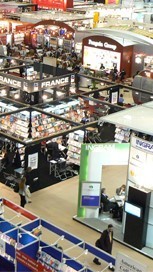 Our intern visited the London Book Fair this week. Here are his personal impressions… The verdict? “Most of the fair in London is about meetings between professionals to sign contracts, buy book rights, shake hands and say “You’re the best” and reply “No, YOU’re the best””

The Salon du livre de Paris (Paris book fair) versus the London book fair: a story about a chauvinist against a capitalist. Naturally, they are not in direct conflict, but I’ll try to enlighten you about the positives and negatives of each event. Just to let you know, I’ve been a part of the Salon du livre as an exhibitor from the beginning to the end and I’ve only been to the London book fair for one day. Both book fairs are organised by Reed Exhibitions, a British events company.

The first difference is about the audience: the Salon du livre is attended by professionals (librarians, booksellers and publishers) but also “civilians”, as we can call people who don’t work in the book trade, who come to buy books or to get autographs from the writers, unlike the LBF which is almost exclusively attended by professionals, for the most part publishers. In France, a regular ticket is 12€ (£9), 6€ (£4,50) for students and free for children under 18 years old, whereas a ticket in London is £35 (in advance) and £50 (during the fair) and it’s impossible to get in if you’re under 16 years old. Who would want to pay this price just to see people shaking hands and congratulating themselves? Well, everyone who is looking for a job in a publishing house, like translators or recent graduates handing out business cards left right and centre. People do the same in Paris, but there is a special day to do that because booksellers rule most of the publishers’ stands unlike in London where publishers are on their stands with foreign rights people and literary agents.

From a factual outlook, the venues are different. The Porte de Versailles is like a warehouse, which if you’re lucky doesn’t smell of the Paris International Agricultural show anymore. It’s a classic square shape, unlike London where the Fair is set up on three floors at Olympia under a huge glass roof that gives a lot of light but becomes stifling when the sun is making an appearance. The LBF is way bigger (42 000 m2) with 60 countries present while the Salon du Livre is more of a celebration of French publishing. The price for 1 m2, which I didn’t find for the book fair in London but might be as expensive as in Paris, take a look: 1 m2 is between 190€ (£136) if you’re at the SNE (National Syndicate of Publishers) and 470€ (£338) if you’re not. Knowing that a stand is 9 m2 at minimum this makes it at least 1770€ (£1270). Little publishers that are making less than 500 000 € a year get 9 m2 for 1887€ (£1335) if they’re not at the SNE. Those astounding prices are part of the reason why Hachette wasn’t there this year. The bigger you are, the bigger your stand and thus your visibility. However, in London, it’s impossible to buy the books that are on display, so unless you sign a juicy contract, it’s impossible to make back what you’ve put in to be there. At the Salon du livre the audience can buy books, which allows the publisher if not to make money then at least recoup some of the costs of the stand.

Time to make a little point about the book trade. In the UK, you can make every reduction that you estimate possible but in France the book’s price is the same everywhere (bookshops, FNAC, Amazon…) and you can only take 5% off the price set by the publisher (Loi Lang). I’ll go into the differences between UK and French bookselling in more detail in another post.

Most of the fair in London is about meetings between professionals to sign contracts, buy book rights, shake hands and say “You’re the best” and reply “No, YOU’re the best”. Everything is perfectly formal, everything is timed, it’s like publishing speed dating. At the French event, it’s more like a giant bookshop; there are a few meetings but most of people are there to buy books, talk with their favourite authors, get their books signed or simply browse. The setting is less formal, there are a lot of drinks at stands, this is a party and the inauguration is an opportunity to make a massive drinking binge. The Salon du livre is the place for syndicates to protest, like this year, with authors demanding higher royalties (to remind you, an author published in France gets 10%, on average, for one book sold; Valérie Trierweiler for her book Merci pour ce moment reportedly got 14% and made millions of euros for it).

From my point of view, the French fair is the best. You can advise people about books, sell books and really meet people without an appointment unlike the London book fair.

To put it in a nutshell, there are two points on which the two fairs agree: the price of the food (ludicrously expensive), and the interesting programme of talks about the publishing profession and the future of books. Although the LBF was interesting and an experience to be at, it is just puzzling: meetings there, in the Internet era, are useless so why pay so much money not to be seen by a civilian audience?

NB These are personal impressions and are not representative of the views of Gallic Books, bien sûr.

Subscribe to a year of new fiction from independent publishers!